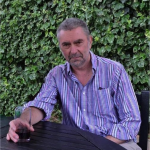 Today we talked to Alan Richardson and what a lovely conversation it was. Alan is the author of a whole raft of superb books including his latest - Geordie's War - that even features a foreword by Sting. I think you will enjoy the interview as much as i did.

About Alan Richardson: Alan Richardson was born in Northumberland, in England. He drifted into the Northern Counties College in Newcastle on Tyne and left there without any useful qualification, then spent a few years wandering around America, attending two universities and totally failing to graduate from either. He has had countless jobs, a few enemies, three wives, four impossibly beautiful daughters, odd adventures in several dimensions, done many stupid things which still make him shudder, and written lots of books on magick which have sold dozens of copies. 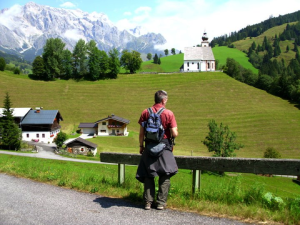 SBR:What motivates or drives you to write books?

AR: Oh gosh, it’s an inbuilt compulsion. I’ve never wanted a career in the so-called ‘real’ world. Never wanted to climb any ladder in the many and varied fields in which I’ve worked. My commitment has always been entirely to my writing. And although I’ve had nearly 3 dozen books published over many years, several of which have gone into numerous languages, my total royalties per year can be measured in dozens of pounds. Yet I have to write – though I try not to write shite. And I try to make every book different, original, although it hasn’t always worked.

SBR: Where do you get your ideas for a book?

AR: They come to me. Unexpectedly. Often in the middle of the night. Often fully formed. Sometimes I go for long periods feeling completely dead, and whining that it’s all gone, forever. And then something explodes within and obsesses me all over again. Energies? Entities? Muses? I don’t know. I wish they could give me a best-seller though, just once!

SBR: How did you get started writing books and when did you realize you were hooked?

AR: When I was 4 I told my Mam (as we would say in Northumberland) that I would be a writer when I grew up. She was horrified. There’s nae money in that, bonny lad, she said, presciently. But I got a little printing outfit with my pocket money, the sort where you assemble each letter to form words, and then stamp the lines on a page. I planned to write the greatest Western ever. Even now, I tell people that Shane is one of the finest books ever written, but they think I’m joking.

SBR: How important is a good book cover?

AR: Well, I dunno. I’ve had some in my early days with Llewellyn’s which have made me shudder. I suppose they’re crucial.

SBR: Who do you admire most as a writer of your genre and why?

AR: Wendy Berg, Josephine McCarthy, Gareth Knight, R.J Stewart among contemporaries. And Dion Fortune of course. Because they are real magicians. With all the quantities of power, love or wisdom that you would want real magicians to have. As William G Gray once observed to me, most so-called Adepts couldn’t raise so much as a good fart between them.

SBR: What books have you just read and why did you choose them?

AR: I read voraciously on all sorts of topics, always non-fiction. Next to my bed I’ve got books that I’m working through in stages on: The 82nd Airborne; the British officer class in the Great War of 1914-18; Laurence Olivier; Akhnaton; Spencer Tracey; John Gotti; Buzz Aldrin; Jack Parsons; British Army tanks; Celtic Christianity; British Sign Language

SBR: What is your background in the Occult/Metaphysics/Magic non-fiction or fiction genre?

AR: My background? At risk of sounding as pretentious or pompous as those who irritate me, Magic has always been in my head and heart, ever since I can remember - and I can remember between this life and the last. I raised the kundalini when I was a teenager using yogic techniques, but when I found out about the Western Mystery Tradition it was like coming home. Somehow I knew it, already. Then Dion Fortune entered my psyche and I was up, up and away! - away with the faeries sometimes. Made a complete tit of myself times without number.

SBR: What do you think the biggest threat to magic is and why?

AR: I think it’s in good shape. Quantum science tells us now that everything that can happen does happen, and that there are 11 dimensions. 40 years ago when I said that sort of thing to people I was laughed at. Now, it’s almost old hat. A merging of science and magic. We don’t need to worship gods or goddesses. We don’t need to kowtow to inner-plane Masters. It’s a two-way process – or should be. Mutual respect, but no bended knee. Sometimes the inner contacts haven’t a bloody clue about our world and you mustn’t be afraid to challenge them when they demand you do things for them.

SBR: How do you create your reality?

AR: I work. Full time. In a job. I manage a specialist Mobile Library visiting the elderly in remote communities and homes across Wiltshire. But mainly living a normal life and talking about normal things to normal people and being a good dad and granddad and husband. A few of my work-mates know about my ‘other’ side, but they also know I don’t like to talk about it. Not because I’m shy, but because, when it comes out in words, it’s all so boring. Inwardly, doing my own stuff however, things happen… I don’t wear robes, stand naked in cornfields or belong to any groups – and I’m not mocking those who do. If you ever stumble on me at the various ancient sites in Britain you’d just see a dopey old git with his flask of tea sitting quietly with shy hellos for any passers-by.

SBR: What’s next in terms of books for you?
AR: du Lac - A novella, based upon an inner contact with that entity –just don’t call him Lancelot!

Letters of Light A collection of letters from William G. Gray written to me from the age of 17 to 22, a sort of Apprenticed to Magic if you like.

Earth God Risen, a revised edition of a book I did many years called Earth God Rising – about the Horned God and his relevance today.

And two others bubbling away.

Alan can found on the web at his FB page and Webpage. His Amazon authors page can be found here.

His latest book can be purchased here.

Leave your thoughts below