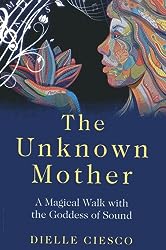 It isn’t every day that one meets a goddess, let alone a Matrika or being that presides over the sounds of language. It is said such deities can bring us complete liberation. Will that prove true for a struggling vocalist named Wrenne when a mysterious woman appears and offers to help her find her True Voice? This beguiling and eccentric teacher guides us all on a deep and powerful journey through 10 mystical gates of sound, sharing great insights, secrets, and profound wisdom about the power of letters, words, and our very own voice to transform the world around us. This isn’t standard knowledge; this is a gift for our times, taking the reader into the very heart of sonic revelations.

The Unknown Mother: A Magical Walk with the Goddess of Sound is a timely contribution to the growing library of magical books that are being published at the moment. It is written as a novel and it is an easy read that keeps your attention from beginning to end. The Goddess is called Matrika and She is described as being the deity that presides over the sounds of language. She suddenly appears – literally – into the life of a struggling vocalist named Wrenne. The experience transforms her life.

The story reminds us that words have power. The naming of a thing was thought to give you power over it and the study of language and sound has always been a key aspect of esoteric study but many of the existing tomes on the esoteric nature of sound are hard to read and difficult to understand. Nor do they naturally appeal to a large audience.

What Dielle Ciesco has achieved with this book is to successfully and gently explain why sound is a key esoteric practice and study through a story that will appeal to a broader audience. She makes you think and challenges your lack of attention on your language – the words you chose to use and what they really convey. More than that, she goes into the use of sound in meditation and other practices and its relationship to the body’s energy centers or chakras.

I particularly liked the analogy of each of us being the vibration that stirs sand on a plate forming patterns - “You are the energy that forms the peaks and points and geometric patterns,” says Matrina at one point in the story. In a nutshell, sound is a vibration and that vibration is a creator of reality. The pitch that you vibrate at, so to speak, is part of how you co-create the world around you. Gaining some degree of control then is key to creating something positive and worthwhile. This analogy also echoed back to me the emerging parallels of quantum physics and esotericism in which the observer dictates whether matter behaves as vibration or particle. More attention on the sounds we make in all aspects of our life will make our world a better place.

“In the beginning was the Word.” Indeed, in many stories of creation, it is sound that brings creation to reality. Read this book to begin to gain a better appreciation for the subtleties of sound, language and vibrations. It will change the way you think. It will start you on the path to a different world. Highly recommended.