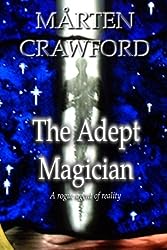 Most of us know of gifted people: Van Gogh, Einstein, Bach, Hawking, mathematicians, faith healers, psychics and so on. But did you know other abilities are possible?

With spiritual training one can achieve abilities far beyond anything we can comprehend right now: with the right training.

Cast in the form of conversations, this book is about one such person, a gent who trained using spiritual exercises daily for 30 years, sometimes at great peril to his health, his family, his friends and his financial well–being.

After extraordinary effort, this Magician was capable of creating earthquakes, 360 degree vision and could even stop time itself. Impossible new–age claptrap?

Astonishing, deceptive in it's unassuming easy style, this book itself is a work of magic designed to bring transformation to the reader in a most subtle way, if one but follows the trail of breadcrumbs this magician left us...

"As like attracts like, when you begin to achieve positive results, you will find every
part of your life changing. The uncommon becomes the familiar, what you never
imagined could be, suddenly is all around you. And that is just the beginning".

Review
I wonder if you have ever met a real magician? No - not some trickster who by sleight of hand fools his audience. I mean someone capable of making physical magic via their will? No such thing I hear you say.... really?

Czech magician, Franz Bardon, was one person reputed to have developed such powers and I can recommend the autobiographical account of his life which was written by one of his close associates after his death in Brno. He could make real magic of that I have no doubts. Despite hanging in magical circles for close to a decade or so, I have never seen or met anyone capable of performing that kind of physical magic. I have never seen someone make it rain or make something burst into flames simply through an act of will. Do people like this exist? Yes, I am certain of it.

The author of this book, Marten Crawford, is also someone who admires Mr. Bardon and who has for many years helped with a Bardon discussion group on line. He and others had some interaction through this discussion group several years ago with a real adept magician who had followed Bardon’s exercises with real success. The interaction makes for remarkable reading and offers significant insights into what it takes to become an adept in real magic.

The book is really a discussion - an interaction - that took place on this discussion board but it soon becomes a compelling read. I think this book works on two levels. First, for those interested in magic, it's a must read as the interaction with the magician reveals some very significant insights, second, for those who are just interested in a good read, this book will also appeal as the fascination builds around the magician and his activities.

I really enjoyed this book and was rather disappointed when it came to an end. I think you will like it too.