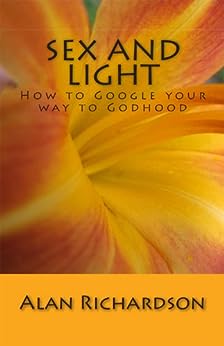 Sex and Light is a rude and uproarious account of one man's efforts to awaken the dreaded powers of the kundalini and remain reasonably sane. Written in a fast-flowing and compelling style, from his own typically unexpected perspective, Alan Richardson has created a new genre of black comic new age humour.

Here is everything you need to know about raising the kundalini from the safety of your laptop, and igniting the serpent fires of love and wisdom. Light-hearted, analytic, but hopeful. It shows us that spirituality - real spirituality - doesn't have to be po-faced and pompous.

I bought this book highly recommended and because I am familiar with Alan's other works. I wasn't disappointed by it but I wasn't blown away (excuse the pun) by it either. Perhaps the copious Google references are now a bit dated or perhaps I had expected more, it didn't grab me and keep me reading like so many of his books have. Essentially, Alan explores kundalini etc. by basically googling around finding what may or not be useful references and exercises all in an excuse to show his girlfriend and now wife, a good time spiritually and sexually. There are moments of pure mirth and comedy that made me chuckle in delight but it was these google references that sort of date the book at bit I think and in the end become a tad tedious. Of course, Alan discovers in the end that good old fashioned love is really the thing and sets aside his pursuit of the kundalini experience. He has the love of his life and all is well so switch off that computer, throw away the book and give her all that attention!

Frankly, I never found much interest in the eastern stuff. Kundalini and weird named energy centers and all of that never really appealed. I found a different way into magic - the western way I suppose and if sex is what you seek, you can still find it aplenty. Along the way, Alan peels off occult knowledge like clothing as he races towards what he hopes will be a passionate spiritual experience. This all makes the book worthwhile as a read. I probably would have given the book 5-stars when it came out but reading it now after some of his other works, 4 stars will do. Still, I can heartily recommend.