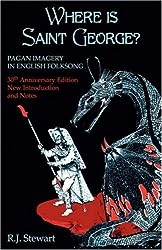 30th Anniversary Edition. New Introduction and Notes. This thought-provoking book suggests that certain basic images found in traditional songs, and certain musical phrases linked inseparably with them, were once common to Celtic-and indeed, pre-Celtic-forms of worship, and were only later absorbed in Christian ritual. To support his theory R.J. Stewart analyses in depth five well-known folksongs-all of them collected originally in the West Country-and examines the 'hidden' meaning of their words in relation to pagan myth and ritual; while in a section on 'Musical Considerations' he demonstrates how plainsong, the basis of formal music, developed from folk-music roots. By comparing these songs with other examples and by drawing upon mythology, classical parallels, early church records, oral lore and poetical intuition to illustrate his argument, the author shows clearly that the key to folksong tradition is the primitive consciousness from which it arose.

I purchased this book because of a particular fascination for St. George. I wasn't disappointed. Bob Stewart takes a look at folk songs and their origins showing how many of them originated from a pagan perspective and have then been adopted and modified to suit christian tastes and values. His arguments are convincing and in particular, when he shows similarities between certain folk songs and the Tree of Life, it struck me that the knowledge is really all around us if you look for it. Not just in folksongs but in myth and legend, place names, fair stories and much much more. As for St. George? Well, I wasn't at all surprised by Mr. Stewarts' conclusions.

If anything, my criticism would be that I found this a hard read at times. It is written in a sort of textbook style as if targeting university program students - and perhaps it was - but for the average interested reader, it may sometimes be a dense read. Mr. Steward demonstrates his grasp of the subject matter in adopting this approach and perhaps he also desired the book to be taken seriously in academic circles as opposed to it being written off as a 'new age' piece.

Overall, I enjoyed the book and learned quite a lot from it. It is something I will keep close by as a reference source too.