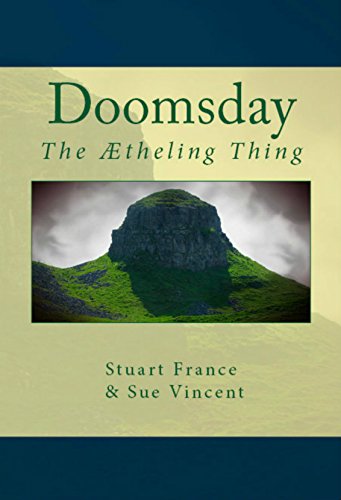 “Who was this Arviragus bloke anyway?”

Don studies the light as it plays through his beer, casting prisms on the table. How is it possible to hide such a story… the hidden history of Christianity in Britain? Oh, there are legends of course… old tales… Yet what if there was truth in them? What was it that gave these blessed isles such a special place in the minds of our forefathers? There are some things you are not taught in Sunday School. From the stone circles of the north to the Isle of Avalon, Don and Wen follow the breadcrumbs of history and forgotten lore to uncover a secret veiled in plain sight.

Wen is checking something in the Dictionary, “Get this… ‘ætheling from O.E. .Æpling, ‘son of a king, man of royal blood, nobleman, chief, prince, king, Christ, God-Man, Hero, Saint…’
“Wait a minute… wait a minute… give me that last bit again.”
“…Christ, God-Man, Hero, Saint…”
“Didn’t we call our Arthur, Aeth in, ‘The Heart of Albion’?”
“We did.”
“And didn’t we set his story in Mercia?”
“We did.”
“And didn’t Mercia grow to become the largest and most powerful Anglo-Saxon kingdom of Albion at one point in its history?”
“It did indeed.”
“Well that’s it then…The Anglo Saxon kings were claiming divine descent.”
“…Along with most other European kings at that time no doubt.”
“That’s true, but the Anglo-Saxon kings’ descent wasn’t from God it was from Christ.”
“And how did they get there?”
“They got there from their very own High One who also hung from a tree with a spear in his side… screaming.”
“Odin!”
“They evidently regarded Christ as an avatar of Odin.”
“Blimey, you’ll not read that in any history book!”
“Just as well we’re not writing a history then isn’t it?”